Wild Rose Brewery is often considered to be the old guard in a scene that is finally starting to flourish and expand. Opening in 1996 at a time when there were only two other “microbreweries” in Alberta (Alley Kat and Big Rock) Wild Rose has been taking a very Albertan approach for almost 20 years. Hef Nelson is a mixture of styles per say. A traditional German Hefeweizen with a unique and modern hop. Nelson Sauvin are a New Zealand hop strain that is known to produce a myriad of fruity notes akin to white wine. The similarity is so pronounced that the hop got its namesake from the Sauvignon Blanc that is produced in New Zealand’s Marlborough area. Hef Nelson is brewed touting a sessionable 5% ABV and a heavy 40 IBU’s (heavy for a hefeweizen).

Pouring out of the amazing 90’s esque bottle that brings back the memories of watching WWF (now WWE) in my friends basement is a cloudy, opaque bright straw yellow. A minor highlight of orange in the body with a thin almost soapy white head. The aroma is beautiful with tons of floral and fruity ester  notes, banana, apple, cloves, coriander and the typical Nelson influenced stonefruit, mango, kiwi and gooseberries. Grapefruit and passionfruit are more apparent in the flavour profile. Mildly sweet malts, toasted wheat, bready notes, light honey and caramel. The fruit is the big show in this beer with tons of tropical notes sparring off against the hefeweizen yeast esters of clove, coriander, lemon rind and banana. Nice crispness on the finish with a moderate bitterness that doesn’t linger long. A nice contrast between the hefeweizen components and Nelson Sauvin hops leads to a nice balance in the profile and an extremely complex yet drinkable brew.

Over the past year I’ve seen images and reviews of Modern Times beer more often than I’d like to considering it is not available in Canada. The San Diego, California brewer born in 2013 is named after a crazy utopian society founded in 1850. Modern Times was started by a former Stone Brewing Co. employee Jacob McKean after many years of homebrewing experience. City of the Sun is an India Pale Ale brewed with Mosaic, Simcoe and Moteuka hops to a heavy 85 IBU’s and 7.5% ABV. I was lucky enough to find this brew at Maui Brewing Company in Kihei, HI after a tap take over at the brewery.

Pouring out a bright, glowing orange and gold in the body the head forms quickly as a stream of cascading carbonated bubbles light the body. The head is frothy and leaves many lacing splotches around the glass. The aroma is poignantly hopped with boisterous citrus and tropical accented notes. Lemon rind, grapefruit, papaya, pineapple and mango are bountiful with heavy pine resin notes. Light caramel and munich esque malts add a biscuity and bready malt character that acts as a good balance to the heavy hops. Bright and fruity with fresh citrus notes on the aroma and in the mid palate. The finish is bitter and astringent but also manages to be crisp and succinct. Nice smack of pine and hop resin with a sticky aftertaste and lingering citrus based bitterness. A truly unique and well crafted San Diego style IPA; hop heavy with floral and tropical accents to off set the overblown citrus and hop bitterness.

East Vancouver’s Parallel 49 Brewing Company has quickly become one of my favourite Canadian breweries since forming in 2012.  One of the predominant reasons for this assertion is Parallel 49’s fondness for brewing unique styles and taking risks with seasonal brews. For example, Parallel 49 has recently produced a Finnish farmhouse Sahti ale, a Jelly Doughnut Strong Ale and a Black Forest cake Imperial Porter to name a few. Jerkface 9000 despite the name is a more reserved and moderate style and is touted as a North West Wheat Ale brewed with Mosaic and Ahtanum hops to 37 IBU’s and a sessionable 5% ABV. The label art and name are a standout for me already as I’m sure I’ve called someone a Jerkface 9000 a quip to which there is no come back.

Jerkface 9000 pours a light orange hued straw yellow with a thin veil of off white head. The head subsists throughout drinking with a few remnant lacing rings left on the glass. The aroma is accented well with citrus based hops. Zesty grapefruit and citrus fruit aromas blend with earthy pine and a few tropical fruit notes typical of Mosaic hops. A bit of a stone fruit aroma after a while reminiscent of Marlborough, New Zealand area Sauvignon Blanc. Light crisp wheat malts add some balance to the fruity, hoppy core. Crisp and fresh finish with a heavy hop presence that leaves zesty citrus and sweet mango and pineapple notes. Moderately dry and astringent with a light lingering bitterness. Overall, Jerkface 9000 is a crisp and fresh wheat beer with pine and citrus hop notes in good balance with light bitterness and a refreshingly light mouthfeel.

Half Pints is Manitoba’s best and single true craft brewery known for their incredible seasonal and special releases. One of the rare seasonal beers to make it from the Winnipeg brewery to Alberta beer shelves is the summer brew Hoppen Heimer. Hoppen Heimer is stylistically defined as a wheat ale but I think it may be best described as a wheat IPA. Single hopped with Topaz to 73 IBU’s and brewed to a very sessionable 4.8% ABV Hoppen Heimer is guaranteed to be a unique beer.

Hoppen Heimer pours a bright clear gold with a thick soapy off white head atop. A small spritzy stream of bubbles as well as tons of soapy lacing rings coat the glass evident of the fresh hops. The first sniff out of the tall weizen glass has a bursting citrus and resinous aroma as well as a milder but present hefe style yeast. Notes of banana, orange rind and a pinch of coriander are all noted in the nose. A great big bursting hop flavour in the mid palate with orange and lemon zest flavours as well as crisp wheat and estery notes. A bit of banana and bubblegum blend well with the big hops. The finish is bitter and lingers on a bit relentlessly with an astringent dryness. The balance is a bit out of whack but the flavour profile is exciting and heaped full of hops and full bitterness. 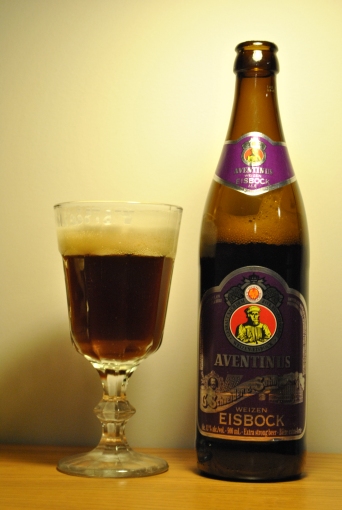 Weissbierbrauerei G. Schneider & Sohn is a traditional Bavarian style brewery that has been in operation since 1872. The brewery remains family owned to present day with George Schneider VI currently at the helm. Aventinus is a strong Weizen Bock style beer named after Johannes Aventinus a Bavarian humanist historian. The Aventinus Eisbock is a stronger version of the well known Aventinus whose origin came to fruition accidentally. According to the brewery the story goes as follows:

“Aventinus, the Wheat Doppelbock of Bavaria, has always been known to be the most intense and complex wheat beer in the world. This was the case for the past sixty years, but not anymore…
Up until the 1940’s, Aventinus was shipped all over Bavaria in containers lacking temperature control. Consequently, the precious drink partially froze during transportation. Unaware that the brew was concentrated by the separation of water from the liquid. People were baffled by this unique version of Aventinus. By chance, the first Aventinus Eisbock was created. Well aware of this story, Hans Peter Drexler, brewmaster of the Schneider brewery, decided to recreate this classic “mistake” in a modern controlled facility. Thus, the Aventinus Eisbock is reborn sixty years later …”

As far as I can recall I’ve never been able to try another Eisbock mostly due to the scarcity of the style. Aventinus Eisbock pours a silken opaque brown with a smooth pillowed head of creamy beige. A small stream of tiny carbonation bubbles slowly cascade towards the head. The nose is fruit forward with banana aromas and a note of brown sugar malts. At 12% its tough to hide alcohol aromas but Aventinus manages to just have a mild warming whiff of booze. The first sip has a gorgeous malty sweetness with candy and brown sugar notes, roasted barley and wheat malts. The bananas and a splash of light citrus fruits show despite the strong malt character. The finish has a supremely smooth and silky mouthfeel lacking an overly abashing bitterness or alcohol aftertaste. The overall taste profile is extraordinary and without prior knowledge I would never have guessed this clocks in at 12% making it a tad dangerous.