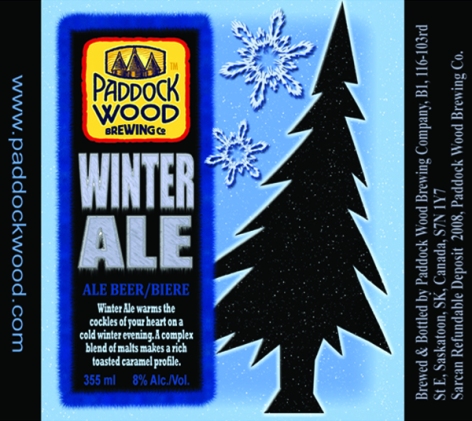 Paddock Wood Brewery located in Saskatoon, Saskatchewan releases their Winter Ale annually in the first week of December. This 8% ABV Winter Ale is brewed in the Belgian Dubbel style with a proprietary candied sugar created for this beer itself. Paddock Wood has long been a gleaming beacon of great craft beer in Saskatchewan, a rather craft beer deprived province. At current, Paddock Wood brews a line of seven year-round brews with a large lineup of rotating seasonals.

This Winter Ale is fashioned as a Belgian Dubbel, a style characterized by rich caramel malts, blended spices and dried fruits. The name Dubbel originated with the Trappist Abbey of Westmalle which at one time brewed a light wit and a darker stronger beer. This dark, strong and sweet style became increasingly popular in Belgium following World War Two garnering the nickname “dubbel”. Interestingly enough, the strong, pale Belgian tripel style also originated with Westmalle and was named for being the strongest beer the Abbey brewed.

Paddock Wood’s Winter Ale pours a dark brazen earthen colour with a tinge of bright ruby amber. The head forms quickly but dies to thin beige cap. Despite the tendency for most Belgian style beers to be heavily carbonated, I spot just a few bubbles cascading their way to the surface. The nose is heavily accented by dried fruits; raisin, plum, prunes as well as a caramelized brown sugar candied aroma. The mid palate is mostly sweet and mildly roasted with toffee and caramel malts blended with dried and candied fruit flavours. A few prominent spiced notes including clove and vanilla accompany an overly sweet taste. The finish has an abundant alcoholic emphasis with a mild spiced aftertaste. In comparing this Winter Ale with a typical Dubbel,I find that this has a rather thin body and lacks the usual boldness of a Belgian Dubbel. That being said, this Winter Ale is a great strong and heavy beer that warms your heart on these cold winter nights.